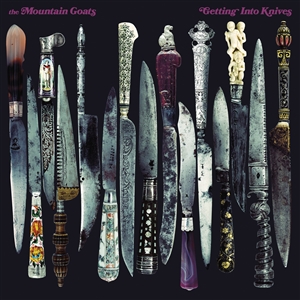 metallic gold double vinyl in gatefold jacket! On the first of March, 2020, John Darnielle, Peter Hughes, Matt Douglas, and Jon Wurster, aka the Mountain Goats band, visited legendary studio Sam Phillips Recording in Memphis, TN. Darnielle armed his band with new songs and reunited with producer Matt Ross-Spang who engineered last year's In League with Dragons. In the same room where the Cramps tracked their 1980 debut album, the Mountain Goats spent a week capturing the magic of a band at the top of its game. The result is Getting Into Knives, the perfect album for the millions of us who have spent many idle hours contemplating whether we ought to be honest with ourselves and just get massively into knives.