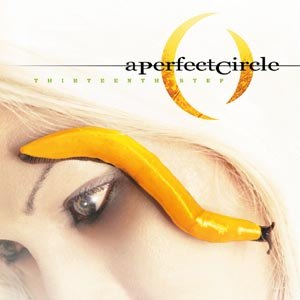 Thirteenth Step is the second studio album by A Perfect Circle. The American Rock supergroup formed in 1999 by guitarist Billy Howerdel and Tool vocalist Maynard James Keenan. Originally released in 2003, Thirteenth Step sold well, charting at the number 2 position on the Billboard 200 in its premiere week and staying on the charts for 78 weeks. The album was certified platinum by the RIAA. Following the release of the album, the band toured throughout the U.S., Europe, Australia, New Zealand and Japan. Three singles were released from the album, "Weak and Powerless", which topped both the Mainstream Rock Tracks and Modern Rock Tracks, followed by "The Outsider" and "Blue", which also charted on the respective charts.