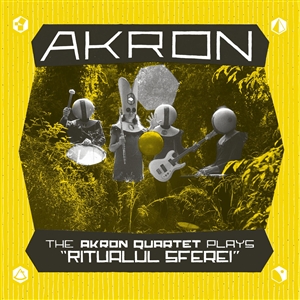 "Voyage Of Exploration (2012) and "Synaptic Beat" (2013) established Akron as one of the best sonic and mood explorers out there, achieving an engaging personal sound while carrying on the legacy of greats such as Les Baxter, Delia Derbyshire, Mort Garson, Sun Ra... In 2014 Akron became a quartet in order to perform their music on stage and soon after they recorded an album with the aim to capture the essence of their live set-up. Five years later, "Ritualul Sferei" (The Ritual of the Spheres) finally sees the light of day, resembling a pseudo-tribal ceremony from an inhospitable corner of the universe.