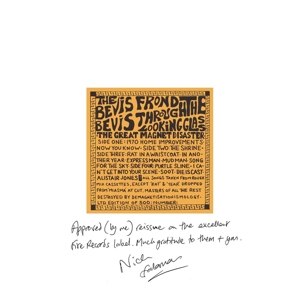 bevis through the looking glass

Gatefold sleeve, booklet. Originally released in a signed limited-edition record of 500 copies, then reissued as a double-LP set on Reckless Records in 1988. This historical collection includes 'Rat In A Waistcoat', 'The Shrine' and 'I Can't Get Into Your Scene'. Closing track includes 'Alastair Jones' recorded in 1967 when Nick was just 14 years old. A labour of love and fiercely independent, his prolific output has seen as many releases in as many years and an uncompromising vision under his own label Woronzow. Hailed as "a Hendrix devotee every bit as tough and contemporary as the serrated guitar chorales of Sonic Youth and Pixies" by Rolling Stone's David Fricke, his immense psych-stoner-rock has seen him become a cult figure in his own right.